Hotspot technology is a way to load and display a large quantity of objects while achieving high performance.

When using hotspots, instead of showing thousands of separate objects, a single layer is displayed that contains images of all these objects. On top of the layer with object images, there is another layer with information about these objects and their borders. This layer allows the objects to be interactive, meaning that we can program an object's reaction to user actions.

The advantage of this method is that information is downloaded from the server only for the objects that are located on the tile that the mouse cursor is on. In addition, data caching can be used. 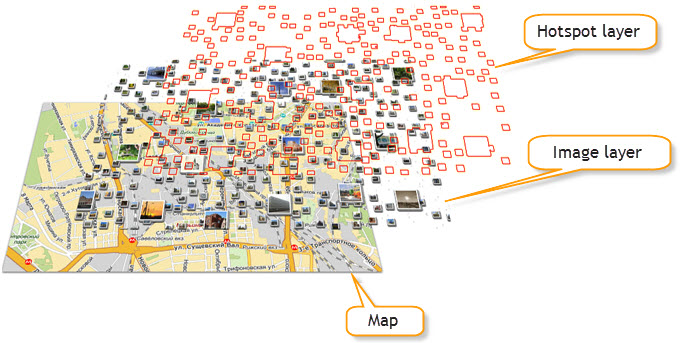 The layer containing images of objects is called the image layer and, like any other layer, it is made up of tiles. To create this layer, you need to generate an image of the tiles where objects will be displayed on the map. The tile background must be transparent.

In order for the objects to be interactive, meaning that users can interact with them, the hotspot layer is added to the map on top of the image layer. It provides the API with information about which parts of the map should be interactive.

An interactive section of the map is called a hotspot and is represented by one or several simple geometric shapes. The hotspot is an abstract concept – you can't see it on the map.

The hotspot layer contains information about hotspots: their position, geometry types, and certain properties (for example, the contents of their balloons or hints). This information is provided in JSON format.

To store the hotspot layer data, the same tile technologies are used as for normal map layers. This means that data is arranged in 256x256 pixel squares that are divided for all the zoom levels. Hotspot data is stored on the server.

The hotspot layer exchanges data with the server using a special object, the data source. The data source generates and sends a request for information about hotspots on the necessary tile and returns the data to the layer.